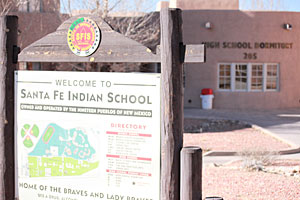 Santa Fe Indian School (SFIS) was established in 1890 to educate the Native American children from the tribes throughout the southwest. The School was established by the federal government during the Boarding School era with a charge to assimilate the native child. The established belief at that time was if you could remove an Indian child from their community, prohibit them from practicing their native language and beliefs, you could remove the cultural and individual identity of the children providing the opportunity to impart new standards for living the American way of life. “Kill the Indian to save the man” was a term penned by General Richard Henry Pratt, the individual charged to deal with the “Indian problem” and responsible for creating the first boarding school in Carlisle, Pennsylvania in 1879. At one time there were 25 boarding schools, established by the US Department of War, located in 15 states with the largest native populations. New Mexico had two boarding schools – the other was located in Albuquerque, New Mexico.

The 1920s represented a shift in federal Indian policy. The Meriam Report was commissioned in 1928 and documented the condition of American Indians on Indian reservations. In 1933, the Indian New Deal became part of President Franklin Roosevelt’s New Deal. The Bureau of Indian Affairs was established and charged with the protection of the American Indian. American Indians in New Mexico boarding schools thrived creating a 180 degree shift in Indian education. This can be directly attributed to Pueblo core values; resiliency and perseverance directly contributed to our current status – survivors.

The history of Santa Fe Indian School uniquely reflects federal and state policies and politics. The All Indian Pueblo Council, utilizing P.L. 93-638, the Indian Self-Determination Act and Educational Assistance Act, was the first Indian organization to contract for the education of their children. Later P. L. 95-561, the Education Amendments, and the technical amendments P. L. 98-511 and P. L. 100-297 allowed SFIS to become a tribally controlled school governed by a Board of Trustees. In 2000, with the signing of the Santa Fe Indian School Act, this land was turned over to be held in trust for the 19 Pueblo Governors of New Mexico. This has allowed SFIS to build a program based on educational sovereignty – the right and responsibility to educate New Mexico Indian children in manner that supports their cultural and traditional belief systems.

In 2003 staff created a statement that would become the measure of our success as an institution, the “Ideal Graduate.” As part of our continuous improvement plan, we are operationalizing this statement by honoring native knowledge while simultaneously preparing our students to become critical thinking problem solvers prepared to engage in the world at large and in their respective communities.

The Ideal Graduate will understand the issues facing tribes in the Southwest and will be committed to maintaining
Native American cultural values. They will participate in the culture of their communities, and will have the skills to
pursue the education or careers that will benefit them, their families, and their people. These skills include: Creative
problem solving, using the analysis of complex problems, the synthesis of collected data, and the communication of
clear solutions; Critical, confident, independent and interdependent, life-long learning; Working productively with all
types of people and making good choices.